No-one is prepared to hear that they have cancer, but in New Zealand one person wins Lotto each week and 500 get cancer, so what are your odds 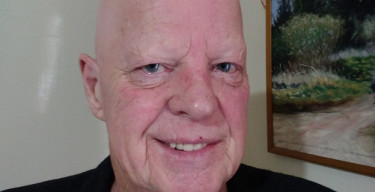 After several rounds of inconclusive tests, 67-year old Richard Mostert was finally diagnosed with throat cancer on his birthday.

“No-one is prepared to hear that they have cancer, but in New Zealand one person wins Lotto each week and 500 get cancer, so what are your odds?“ says Richard.

“People ask you how you feel about it – but you haven’t had time to process it. You have too big a cloud in your head.”

“Sorting out my family overseas in Wales was a challenge - I didn’t want to tell them at first, but I’m glad I did. Even a phone call from people in Wales is great medicine,” says Richard.

“Don’t be afraid to reach out to others, you find out things. You find out how much people care.”

Richard says that self-care is challenging, given that he lives alone.

“It was and it is difficult. Every day is a battle and you’ve got to win them all,” says Richard.

“I’d always been an independent, private person but I realised I was going to need some help.”

Richard describes the Cancer Society as “a flock of angels, every single one of them.”

“I couldn’t have done it without them. When you’re really sick it’s impossible getting to the hospital with the parking and the walking – you have no idea how long it is going to take,” says Richard.

Having throat cancer has brought particular challenges for Richard in terms of difficulties eating and drinking.

“I’ve had to learn to eat different foods – I lived off soups for a long time but now I don’t think I could eat soup ever again,” he says.

Chemotherapy and radiation treatment have also changed his taste buds so that he can longer stand the taste of many of the foods and drinks he used to enjoy.

Unsurprisingly Richard has lost a lot of weight – 20 kgs in fact, but he has managed to put 2kg back on.

Richard says that needing to have all of his teeth removed due to the damage they would have suffered from his cancer treatment was “a big blow”.

“It changes you – you have to get used to what you look like.”

Richard says that he is currently four months along on a two-year journey to recovery. He says that while sometimes it feels as if his progress has been “glacial”, he is definitely getting better.

Healing takes time, you just have to accept that.

At first he could only stand and do things for 10 minutes before getting exhausted whereas now he says he gets tired after about 6 hours. He describes that as “a great thing to wake up to.”