I had to go to Dunedin for radiation for my prostate cancer ... we stayed at Daffodil House, coming home for the weekends. While we were there, Daphne had some radiation treatment, as well. A couple of times, I would climb off the radiation machine, and Daphne would get on! 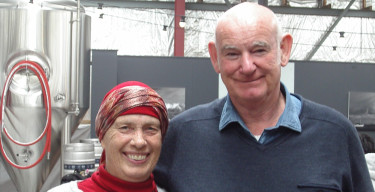 Henry and Daphne McHoull both battled with cancer. Henry McHoull would like to tell you about the journey that his wife Daphne and he had with cancer.

“In July 2018, our life changed dramatically. Daphne developed a large lump at the top of her leg/groin area. Her doctor sent her to Dunedin to have a Fine Needle Aspirations (F.N.A.), which takes samples out of the lump for analysis. When the results came back, it was like a real kick in the guts. They showed that she had a rare form of melanoma called Merkel Cell Carcinoma. We were told that her cancer was a rare type of skin cancer, and there was no cure for it with any treatments or drugs. It was also a very aggressive cancer and difficult to control.

During the previous summer, she had noticed a small red lesion on her skin that resembled a blood blister. She just thought that there was probably a slight prickle from the garden that would eventually go away, which it did. The oncologist believed that that was her primary event of her getting cancer. Daphne also had Crohn's Disease and Rheumatoid Arthritis.

After many meetings with numerous specialists in Dunedin, they decided to send us to Christchurch for a P.E.T. scan of her whole body. Unfortunately, this scan showed that cancer has spread to numerous parts of her body. A few more meetings later, they decided to commence a course of chemotherapy under the guidance of Dr Chris Jackson and his registrar Dr Tessa Morris.

Her initial treatment was four cycles of chemo involving three days a week and then rest for two weeks between cycles. Daphne handled this chemo very well and had absolutely no side effects whatsoever. In between the cycles of chemo, she had some radiation on specific areas (shoulders and thighs). Although Daphne had no side effects, all the travelling from Oamaru to Dunedin (3hr return trip) didn't help. She started becoming very tired. Because the lymph nodes at the top of her leg were very swollen, it began to cut off the blood circulation in her leg and cause blood clots. I ended up having to give her an injection of blood thinners every day.

After four cycles of chemo Daphne was handling it very well, with only a few minor hiccups on the way, she also had a C.T. scan after that cycle, and it showed an excellent response to the treatment. Most of the tumours had reduced in size, so Dr Jackson suggested we carry on with another four cycles of chemo since her reaction to the first four were excellent with no significant side effects.

Partway through the second cycle of chemo, we had a meeting with Dr Jackson, and he compared the latest C.T. scan with the original P.E.T. scan and informed us that most of the tumours had reduced in size. That was such was a positive result for us. She was still having minimal side effects from chemo. During this cycle, she had to have a blood transfusion before each session. These were carried out at the Oamaru Hospital, which saved us a few more trips to Dunedin. Each transfusion took eight hours. After another C.T. scan, it showed that one of the tumours had disappeared entirely. Dr Jackson was very pleased with her progress.

While all this was going on, I had to go and get a blood test for my thyroid medication, so I told my doctor that she could do a prostate (P.S.A.) test while they were at it. She asked me if I was worried about anything, and I said that I hadn't had one for about three years, so it was about time for one. The next day I got a phone call saying ''you had better come and see me!". The test was a bit high, so she sent me to Dunedin for a prostate biopsy. That came back, and they told me I had prostate cancer. That was all we needed to hear. Both of us had bloody cancer!!

I had to decide to either have surgery or radiation. The Cancer Society in Oamaru asked a couple of men in Oamaru who had surgery and radiation to come and talk to me about their experiences. I found this very helpful. I decided to go with radiation as it was still contained in the prostate.

Meanwhile, Daphne had her last cycle of chemo and then had a C.T. scan. She had an excellent response to her treatment, and apart from a couple of small lesions, she had a near-complete positive response. Dr Jackson was so happy for us he was calling her a miracle and a super-star. But then he said there is always going to be a "but". It could come back as quickly as it had disappeared. We didn't worry about the "but" and lived for the moment.

There wasn't very many of those up until now. We were so happy that I virtually drove back to Oamaru with only one hand on the steering wheel and holding her hand with the other.

I had to go to Dunedin for radiation for my prostate cancer. The treatment was for five days a week for four weeks, so we stayed at Daffodil House, coming home for the weekends. While we were there, Daphne had some radiation treatment, as well. A couple of times, I would climb off the radiation machine, and Daphne would get on!

Towards the middle of 2019, Daphne started getting very forgetful, and her mobility deteriorated quite considerably. She was just not the happy lady that I married anymore. Leanne from the Cancer Society in North Otago gave us the use of a wheelchair that a previous patient had donated. It was a godsend for us as it gave us the ability to get out and about.

Things did start going downhill very rapidly, and she began having seizures and losing consciousness. That was a horrific time for me as I could not stop her from crashing to the ground and hurting herself. She was not that heavy, but because she was blacking out, it was hard to try and let her down gently. Once, she had a nasty fall in our ensuite which is tiled and bashed her head on the tiles resulting in a real shiner of a black eye.

When the seizures started, we got a St John medical alarm, which I used a few times. The last time I used the alarm, all hell broke loose. The volunteer fire/rescue truck arrived with some of their members in private cars. Then the ambulance arrived with a couple of members in St John cars. People were running around everywhere. At one stage, there were probably a dozen or so people in the house.

Meanwhile, Daphne was lying semi-conscious on the floor in our bedroom. She was taken to Oamaru hospital by ambulance for checks. I asked why the fire brigade had turned up, and the chief told me that they were told she had a heart attack!

They started examining her at the hospital, and the doctor said to me that it was more than likely the tumours pressing on her brain. “What”. Nobody had ever told us that she had a brain tumour. The doctor felt awful because he thought that we knew. Daphne was still only semi-conscious, so she didn't hear that. I was devastated and completely broke down. They had done a C.T. scan of her head before we left Dunedin, but we were never told the results of that scan. She had three large tumours in her brain. Her kidneys then started to fail, and she started going downhill very fast.

I took her down to Dunedin to see Chris Jackson, and he said this was a significant setback and was quite upset that this had happened as she was doing so well. Brain surgery was ruled out as they were too big. Chris said that nothing more could be done except try and make her as comfortable as possible. The doctor at Oncology had given her only about two months before this, and he was only one day out on that prognosis.

On 6 September 2019, I told her I loved her and gave her my permission to leave us for a better place. Four hours later, Daphne passed away with me by her side. Our son and daughter and her sister were also with us. She was only 64 years old.

To top all of that off, as if things weren't stressful enough, I got a call the very next day after Daphne passed away to say that her younger brother had been found dead in his bed. He had pneumonia and a nasty cough but wouldn't go to the doctor. He had had a coughing fit and choked.

So the family had two funerals within that next week, Daphne on Tuesday and her brother on Friday. Very stressful. One of the family was heard to say, "what the hell have we done to deserve this".

During her treatment, we managed a trip to Te Anau and saw Milford Sound, Doubtful Sound, and the Glowworm caves. We also had booked a cruise around Australia. That was going to be in September, so we had to cancel that.

I have been cleared of my prostate cancer. Over that whole nearly 18 months, we clocked up over 21,000 km on our vehicle, of which probably 15,000 was going to Dunedin and back. All the people in the Oncology department in Dunedin, the District Nurses, Doctors in Oamaru hospital, Leanne from the North Otago Cancer Society, and the Hospice in Oamaru were so helpful. I am very grateful to them all. Daphne had complete faith and trust in her carer, a special mention to the Royal District Nurses Society. If you read this, you know who you are. My neighbours in Blue Stone Drive and friends in Oamaru were also terrific, always bringing food etc.

I was so impressed with all these people that I have become a volunteer for the Otago Cancer Society and hopefully can pay back the kindness.

After being married to Daphne for just under 45 years, I am still struggling with my life without her. We were very close and did everything together. I miss her terribly, and my life will never be the same again.”